~”There were dragons when I was a boy…”
(How To Train Your Dragon, Cressida Cowell)

I feel like I have been bathing in the Dragon Energy for quiet some time now.

The Chinese horoscope animal is the Pig this year, but not in my house.

This year we came full circle with dragons…

Dragons have been a part of so many folk stories around the world. From China, India, Europe… But where are they now? 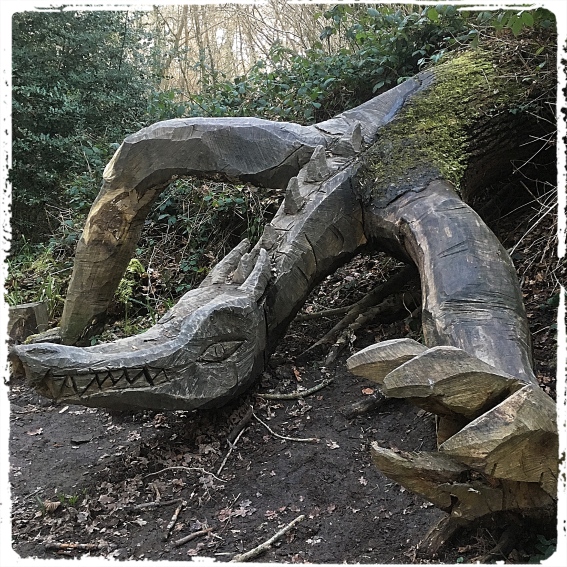 This beautiful sculpture of a dragon appearing out of a tree stump is located in the woods, on one of our favourite walks…

This is one of his recent artwork about dragons, he has also been working on a papier maché dragon head, while listening to one of his favourite band: Imagine Dragon.

We moved in this house mid May 5 years ago, my son Thom only just turned 6 back then. Shortly after we moved here, he got obsessed with Dragons. His room was covered in them, as I read him the books from Cressida Cowell’s How to train your dragon book series – Some we read a few times because they were favourites.

He got totally blown away by the films. His love for dragons remained and I found myself regularly checking the updates on the release date of the 3rd film regularly, since 2014. It kept on being postponed, so I had to keep checking every year. It first said 2016, then 2017 and then March 2019, which felt like a life time away back then!

As all parents know too well this bitter truth: childhood years are quick.

We found ourselves counting down the years, the months, the weeks and then the days… until it came out! 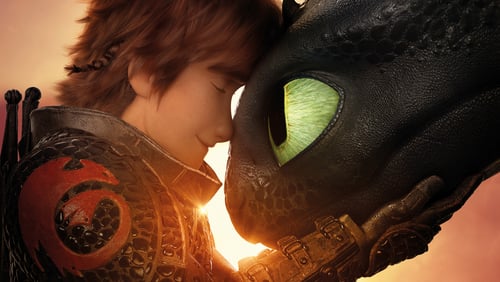 How to train your dragon is a tale about growing up with a disabled hero who is trying to find his own courage and strength despite the fact he can’t live up to his dad’s expectations. He is sensitive and his strength is his ability to communicate with dragons and educate his Viking tribe about them… just like his mum who is a dragon whisperer…

The book series was written by Cressida Cowell and is a different plot from the films. The books are the memoirs of the main character, Hiccup Horrendous Haddock The Third. It re-tells his childhood and his journey to becoming a hero and finding his own strength and courage. It’s very funny and filled with illustrations.

The films have kept the main characters and give a few nods to the books. The general themes are there, but it focuses on different aspects of the stories. Hiccup’s dragon is called Toothless although in the book he is tiny and quite vain. In the film – as you can see on the picture above – he is massive and Hiccup rides on his back, which he couldn’t do with the Toothless in the book who can only perch on his shoulder or hide in his pocket.

The music score is one of my favourite “getting stuff done” soundtrack… Feel free to play it while you carry on reading :)

I’m so glad that these kids get to have a story of their own, especially for them, instead of a remake of previous generations tales, which seems to have become the usual, risk free norm these days in Hollywood.

This is a story written for them. With a lot of forethought and love. I really recommend the books, the epilogues are so thoughtful and very moving at times. It’s definitely something very special and I’m glad I got to enjoy these special moments with my kid. The audiobooks are superbly read by David Tennant. He does a much better job than me at reading these books out loud, as he never seems to get tired for some reason!

The series leads us to the ultimate questions we have all wondered at some point, regarding dragons. Are they mythical creatures? Did they really exist?

My kid and I choose to believe that they did exist.

Because to believe, is all that matters really.

When my kid asked me the question a lot of parents dread, you know about Santa Claus – because we feel like we may have to admit to our kids that all these years, we have been lying to them…

My answer was simple: There are some people who choose to believe in magic, and think that anything is possible in this world. And some choose to only believe in what they see. Often you will find that their world is very small, because they haven’t seen much. These people will believe in God, or in political elections, or in other things that to me sound really far fetched. But they will happily call themselves sensible people and will tell you that there is no such thing as magic.

But when you believe in magic, a lot of doors open to you, because your imagination has no limits.

When you only believe in what you know, you are indeed very limited. So it’s up to you what you choose to believe in.

Sadly a lot of kids are told at a very young age that magic isn’t real and that all there is in this world is what your eyes can see. These kids often look boring and take great pleasure in telling you that Santa doesn’t exist or that there are no such things as dragons, out of fairness because their sense of wonder was taken from them too early.

I have noticed that a lot of people cary a sense of loss, a grief, into adulthood and they spend most of their adult life trying to recover this sense of wonder that was taken from them too early.

It’s Boy’s birthday in a couple of days… His birthday party is tomorrow, then it’s his actual Birthday, then we are off to London to watch the Harry Potter plays…

As a lot of parents I wish I could make time stand still. But I can’t.

My name is Noémie, I run animal communication workshops to help people enhance their relationship with animals and the natural world. My work is about the profoundly important messages we can receive when we focus with our hearts. Through cultivating the heart as an organ of perception, we can develop our ability to listen to and communicate with one another as well as our natural environment – plants and animals included. View all posts by FocalHeart

All of the material in these pages is protected by copyright. All rights reserved © FocalHeart 2013-2020, unless credited otherwise.
If you want to use any of this commercially or display it publicly, please contact me by email.

My name is Noémie, I run animal communication workshops to help people enhance their relationship with animals and the natural world. My work is about the profoundly important messages we can receive when we focus with our hearts. Through cultivating the heart as an organ of perception, we can develop our ability to listen to and communicate with one another as well as our natural environment – plants and animals included.