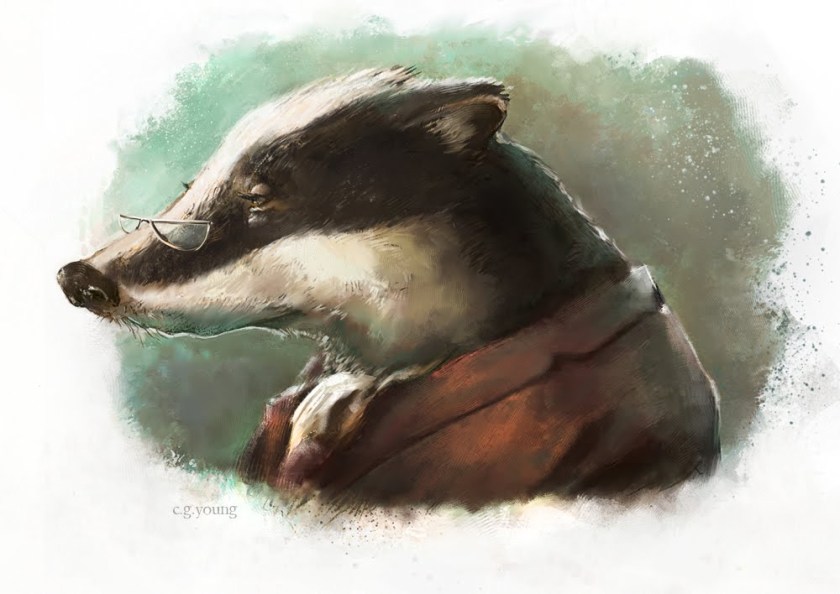 In Britain, The Wind in the Willows (Kenneth Grahame) has been a childhood favourite for many generations and is probably one of the main reasons why so many British people hold the badgers so close to their hearts.

Badgers are an iconic species of the British countryside and have been in the news for the last few years, given the UK Government’s controversial decision to trial a cull of badgers in the belief that this will have an impact on the spread of bovine TB (bTB).

Opponents of the cull – such as myself- claim the cull has been (and will be) not only costly to the UK tax-payer but also completely ineffective in controlling bTB and instead of blaming badgers for the spread of bTB, denounce poor cattle management, inadequate disease-prevention measures on farms and massive movements of cattle from farm to farm as the real culprit.

The imminent expansion of England’s controversial badger cull “flies in the face of scientific evidence”, according to the nation’s foremost experts, who have called on new prime minister, Theresa May, to halt the “failed” policy.

The scientists say the badger cull, intended to curb tuberculosis in cattle, is a “risky, costly, and inhumane” distraction and may actually increase TB infections.

A research done by Exeter University show that Intensive cattle farming practices can be blamed for an increased risk of bovine TB in the herd. The study shows that the biggest dairy farms are the ones with the highest rate of bovine TB. Small scale farms are a lot less troubled:

“Researchers analysed data from 503 farms that had gone down with the devastating disease, along with 808 that stayed clear.

They found farms with herds of 150 or more were 50% more likely to be hit by the disease than those with 50 or fewer animals.

They also discovered that farms growing and feeding maize, those feeding silage and those which had removed hedgerows were also at greater risk of suffering a TB breakdown.”

It has been suggested that as culling was not selective, as many as six out of seven badgers killed could have been perfectly healthy and bTB free. 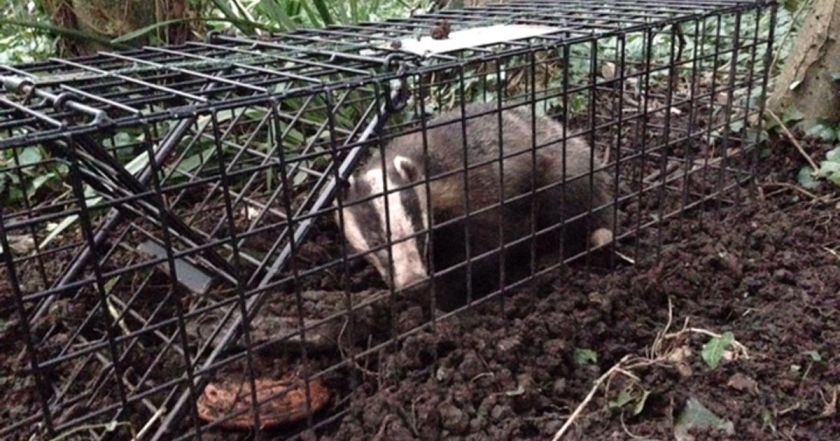 1,500 badgers were killed in 2015 as part of the government’s badger cull, according to Defra.

These figures show 756 animals were killed in Dorset, 432 in Gloucestershire and 279 in Somerset as part of efforts to eradicate bovine TB.

Well, that’s the official figures. Defra doesn’t mention the consequences of gallons of petrol poured down badger sets. And the casualty amongst the badger cubs after their mothers were shot.

Badger culls in Gloucestershire and Somerset are due to begin their fourth year in the coming weeks, with another in Dorset entering its second year. But up to 29 applications for new culls across nine counties, including Cheshire, Cornwall, Devon, Wiltshire, Worcestershire and Herefordshire are now being evaluated by officials. The environment secretary, Liz Truss, backed a rollout in February, saying: “I want to see culling expanded across a wider number of areas this year.”

The activists who protest against the cull are divided: some want to vaccinate the badgers while others believe that vaccinating them is admitting that they are the cause of bovine TB and could also weaken the species, with the cocktail of toxic chemicals, including mercury contained in the shots. They would rather that we leave the badgers alone altogether and focus on the real issue, which is bovine TB – meaning TB on cattle not badgers – I agree with that.

Boy during an anti cull march in Brighton in 2013

Badgers tend to keep themselves to themselves and only come out at dusk. Sadly we are more likely to see them dead on the side of the road than alive in the wild… especially if the government won’t admit that this cull was just a really bad idea… 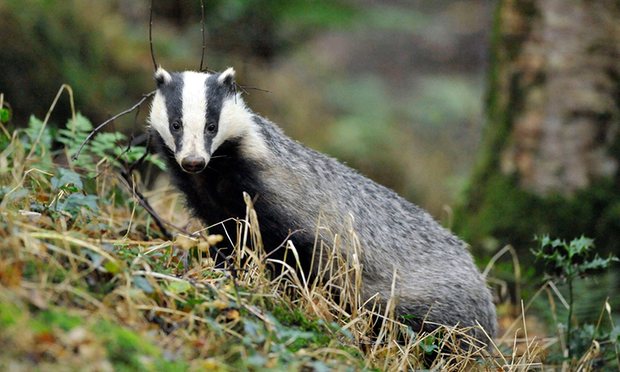 As Patrick Barkham, author of Badgerlands, wrote in the The Guardian: “the best case for the badger cull is getting shakier. Pragmatists would’ve abandoned it when the 2013 cull was revealed to have cost at least £5,200 per dead badger, far more than badger vaccination. Pro-cullers blame this on the cost of policing protesters but anti-cull activists aren’t going to disappear, and nor are those costs.

Pragmatists might also bow to the wisdom of the British Veterinary Association, former cheerleaders for the cull, who recently announced they were now opposed to the controlled shooting of badgers on grounds of humaneness and recommended cage-trapping before shooting badgers. (If you go to the trouble of trapping a badger, sensible people would inject it with the vaccine that has proven effective in a four-year scientific trial.)”.

Because the target of 70% badgers to be culled had not been achieved, the cull period was extended. During the 3-week extension in Somerset, an extra 90 badgers were culled, taking the total across the whole cull period to 940, representing a 65% reduction in the estimated badger population. During the 5 weeks and 3 days extension in Gloucestershire, 213 further badgers were culled, giving an overall total of 921, representing a reduction of just under 40% in the estimated badger population.

Defra and Natural England were unwilling to divulge what data would be collected and the methods of collection during the pilot culls. However, in a decision under the Freedom of information in the United Kingdom act dated 6 August 2013, the Information Commissioner’s Office found that Defra was wrong to apply the Environmental Information Regulations in defence of its refusal to disclose information about the pilot cull methods. Defra originally intended to sample 240 badgers killed during the pilot culls but confirmed only 120 badgers targeted were to be collected for examination of humaneness and that half of these badgers would be shot while caged.

Therefore, only 1.1% of badgers killed by free shooting were tested for humaneness of shooting. No badgers were to be tested for bTB.

Details of the ongoing pilot culls were not released whilst they were being conducted and Defra declined to divulge how the success of the trials would be measured. As a result, scientists, the RSPCA and other animal charities called for greater transparency over the pilot badger culls.

Leaks reported by the BBC in February 2014 indicated that the Expert Panel found that less than half of all badgers were killed in both trial areas. It was also revealed that between 6.8% and 18% of badgers took more than five minutes to die – the standard originally set was that this should be less than 5%.

I have recently met an activist who has been guarding badger sets in Gloucestershire since 2013. She confirmed what I suspected: because the cull is not monitored by any authority people just get out there, pour petrol down the sets and slash the tyres of the activists who take turns to keep watch over the sets.

According to Badger Action News, an article in the Western Gazette published in November 2013 referenced a Freedom of Information request which claimed that ‘43% of the land involved in Gloucestershire was on cattle and dairy farms [and that] in West Somerset, only 60% of the participating farms have cattle.

This appeared to challenge the popular narrative that the badger culls are driven primarily by cattle farmers and are being conducted solely to prevent the spread of bovine Tuberculosis in cattle.

Two companies were established specifically for managing the two trial badger culls. They were made up of farmers and landowner ‘members’ who financially contribute to the costs of running a badger cull in specified areas over a four year period.

Badger Action News also reports that very little ‘official’ information is known about the cull zones and syndicate farms and land owners (those supporting the cull through finances and access to land).

There is also anecdotal evidence of social pressures within the cull zones for landowners to support the cull – and of bullying from the NFU and ostracism of non-cull supporters by others.

It appears that the cull is receiving support from large hereditary land owners in each zone increasing social pressure in small communities.

A project that involves shooting iconic wildlife rather than watching it or vaccinating it makes no sense to biological scientists looking at eradicating bTB. But to social scientists looking to understand why shooting has been chosen despite the evidence of formal government studies, a partial explanation begins to emerge.

Patrick Barkham, argues that “There’s only one reason for this badger cull – votes”. He explains:

“The government is culling because some farmers would like to remove the badger’s status as a legally protected animal. David Cameron knows that repealing wildlife laws is unpopular and tricky. Nor, more significantly, is he likely to ever obtain a Commons majority to reverse the fox hunting ban. A government-led badger cull is the next best symbolic gesture to persuade resentful rural communities that the increasingly metropolitan Tory party still feels their pain.

DEFRA is apparently considering a request from the NFU to simplify the cull license conditions “to make it more viable for farmers in new areas”.

The most honest answer, however, is that we will never conclusively know if culling badgers reduces cattle TB because the government refuses to fund proper scientific monitoring of the cull. And, unfortunately, there is nothing honest, nor scientific, about this futile annual slaughter of wild animals.”

So dear friends, keep your eyes out and if the cull was to happen in your neck of the woods, raise your voice to save the badgers, be heard via online petitions, protests and write to your local newspapers about it.

Badger Culling in the United Kingdom

There’s only one reason for this badger cull – votes

Inside the cull zones

12 thoughts on “Tough times for Badger”