I hope you are all well?

I haven’t been around these parts lately partly because I thought that what was really needed was for me to stop rambling about my knitting but just get on with it and finish all these unfinished projects I have on the go: Less blogging, more knitting kind of motto.

So I’m not allowed to cast on anything new until I have finished everything I have already started. That is me being disciplined, you see…

So a while back I finished him… 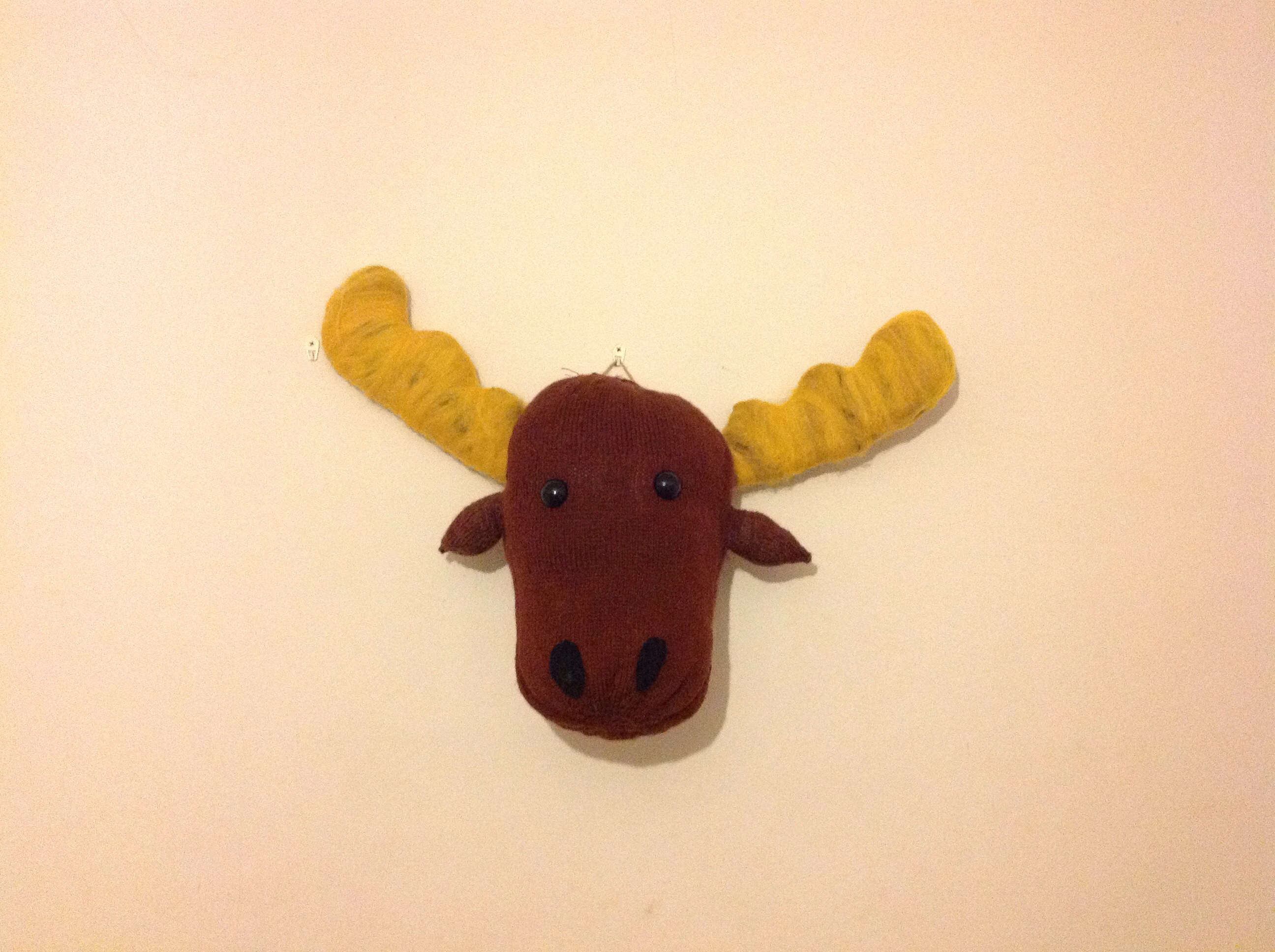 The antlers were giving me trouble. I wasn’t happy with the knitted version so I ended up needle-felting them, which looks much better, to my opinion, and was great fun to do. Then onto the next challenge: even with wires in them, my antlers were not sticking up straight. They were all floppy like cocker spaniel ears. As you can imagine, that wasn’t the look I was after.

So I procrastinated for a while, contemplating the idea of calling it a cow head instead… 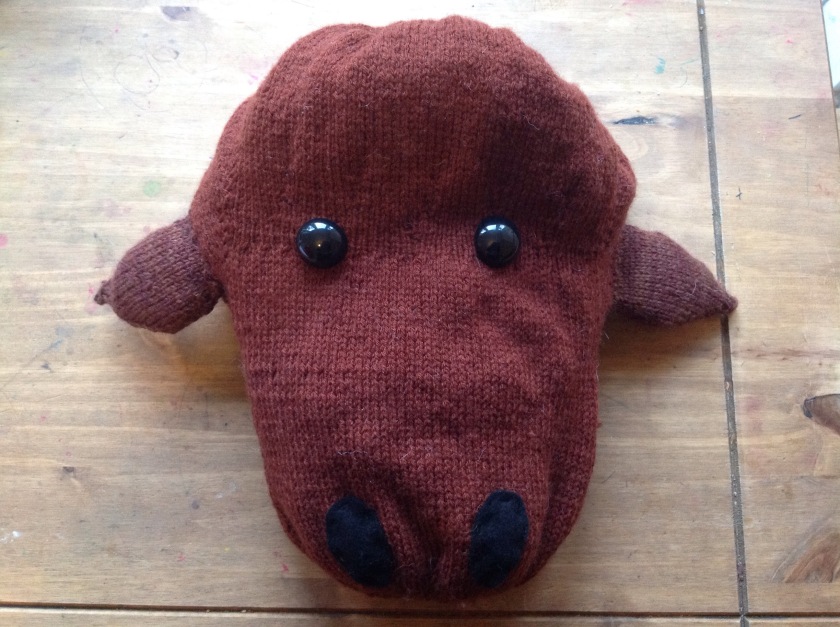 The procrastination process was in fact very useful.

As I spent weeks and weeks procrastinating – knitting away on other projects – I thought and pondered about these troublesome antlers. The more I thought the more I came up with ideas and I ended up putting a stick in each antler and I gaffer-taped the stick onto the back support. That on its own wasn’t enough, as the gaffer tape kept coming undone. I had to sew the antlers with strong cotton thread too as a back up. It worked.

And I also finished this guy…. 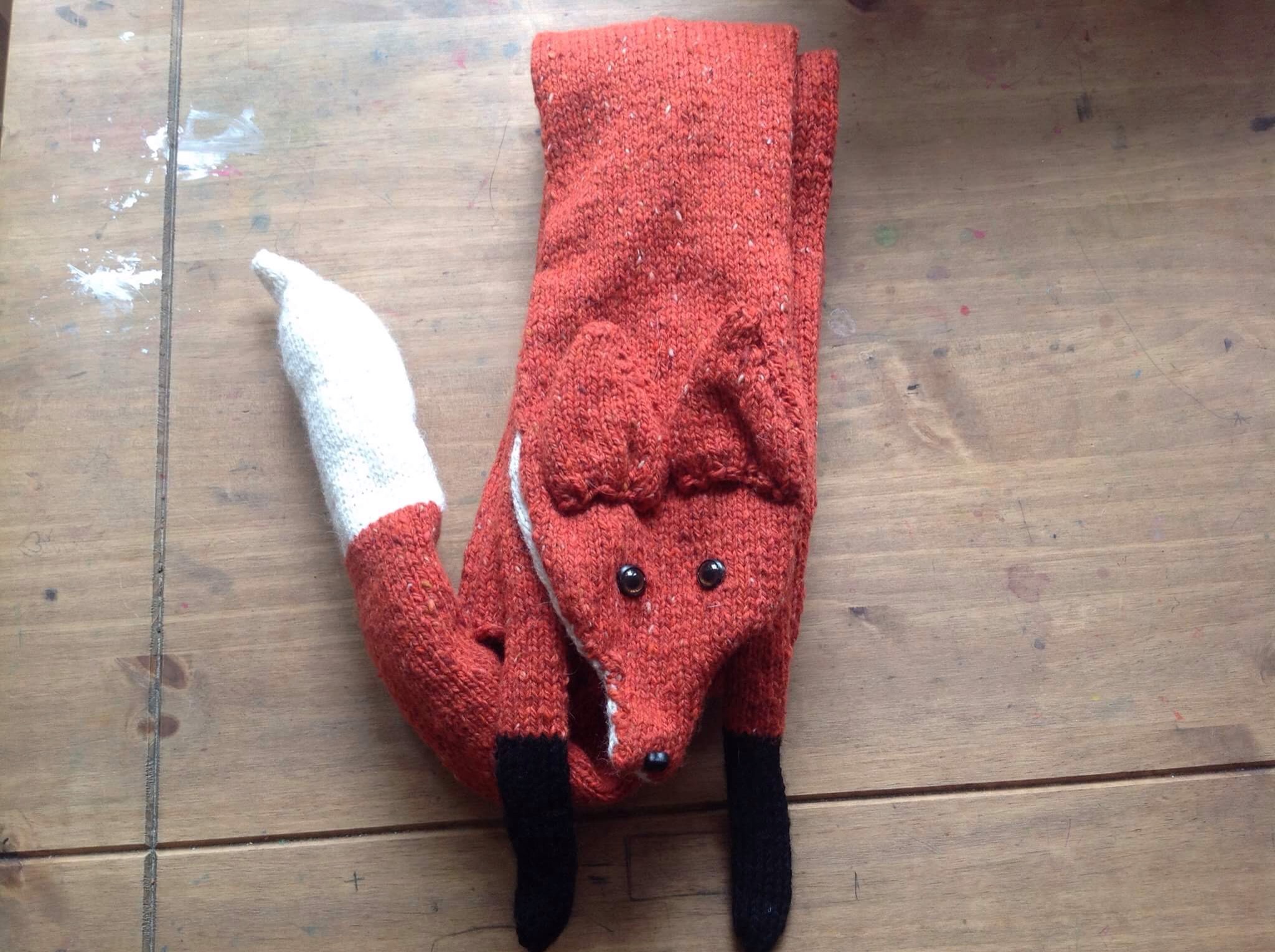 It’s a fox stole I had been working on for a little while… But I kept running out of yarn. I love this yarn, it’s from Donegal in Ireland. It’s gorgeous. You can’t quite see it on this picture, but it’s speckled with so many colours that I couldn’t stop knitting it up as I wanted to see what bright speckle was going to appear next!

I have ordered more of it to knit a fox hoodie for a friend’s baby and a fox head to keep company to the moose head in my living room.

The two patterns – the moose head and the fox stole – are from Louise Walker.

I also made a lot of progress on my Still Light tunic, which is coming along quite nicely…

This is such an enjoyable project to knit! Very straight forward and drama free, once you know your Make 1 Right from your Make 1 Left, as there are quite a few of these. Otherwise it’s a pure relaxing, meditative knit.

I’m knitting simultaneously the pocket pleats and the sleeves, as I don’t want to knit those last. When the body is finished, I want to be able to wear the tunic straight away – Well… Weather permitting as it’s quite hot here already. I suppose wool has temperature regulating qualities, so it will be a great way to put this to the test this summer!

What about you? What have you been up to?

15 thoughts on “On discipline and procrastination…”