But the truth of the matter is, there are more maps in the world than anyone can count. Every person draws a map that shows themselves at the center.

— By Catherynne M. Valente, The Boy Who Lost Fairyland

I have lots and lots of maps in my head. Maps with shortcuts and scenic routes, in various parts of different countries… Secret beaches with abandoned chapels in the dunes or secret spots where you can park for free in many towns and cities, hidden speed cameras or stunning view points. I have maps for good dog walks, organic shops hidden in the Ashdown Forest or tucked away in obscure parts of London. Maps to get to remote sea side villages in Spain or in India or how to get to the run way of Gatwick airport. Abandoned derelict factories, secret surf spots, ghost towns and disused old skate parks from the 70’s, the best basque cakes in the entire galaxy… It’s all mapped somewhere in my head!

And that’s why I have always refused to have a sat nav. Because I love working out where I am on a map.  I love the randomness of finding a new gem, often through the confusing process of getting lost (For me knowledge often arises from confusion).

Despite all my maps, my own head is the one place where I always get lost. Even with a map on my lap – Perhaps the only times I ever secretly wished I had a sat nav !

My 7 year old son has lots of maps in his head too… Last year he drew a map of Neverland as we were immersed in the J.M. Barrie book… He spent a lot of time thinking about Neverland, pondering about where everything was… and imagining all the adventures he would have with the lost boys as soon as he would get there. He came up with a lot of cunning plans to get rid of Captain Hook!

He wrote that note to Peter Pan a year ago, on the back of an old envelope :

He has been drawing treasure maps lately. Some are maps of secret islands which aren’t on any other maps… others show locations of shipwrecks, he can even draw a map of where the Titanic sank.

What he loves most of all are treasure maps:

His maps are reassuring to him. He was showing the map above to the paramedics last week, when they came at 6 am to take his dad to hospital (He had excruciating back pains caused by a trapped nerve).

Thom had slept in his pirate outfit and insisted to show this treasure map (above) to the paramedics. That was his way to deal with the situation, because he didn’t know what to do.  When they put his dad in the ambulance, He was still showing him his map through the window.

I suppose maps are reassuring to all of us. It’s a point of reference, a starting point… depending on the scale it either shows us as the big shark in a tiny pond, or a speck of dust in an infinite universe…

It makes us feel that we are somewhere, on that map, so we won’t get lost. And if we do, well we can look at it and figure out where we are.

Although I hope paramedics are using sat nav these days…

We went on a treasure hunt yesterday. We made a map, and went in the woods to find an old forgotten treasure… and guess what?

We found it! Thom was so amazed and excited when he found it! He couldn’t believe his luck…

We hurried back out of the woods straight away, in case the pirates came back. We didn’t want to bump into them…

I was told yesterday that there is a new Peter Pan film that is due to come out very soon… So more pirate adventures on the horizon for us then! 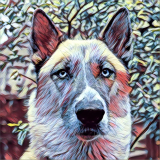 I do hope the trapped nerve was resolved. That sounds excruciating. Maps and treasure hunts and pirates sound like great fun. My boys also enjoy drawing up maps inspired by books they have read and movies they have seen. They once drew a massive map inspired by Lord of the Rings that required a roll of lining paper. Do you like the look of the new Pan film? We cannot decide if we like the idea of it or not.

Wow the Lord of the rings map sounds brilliant! I’d love to see it! It must have taken a long time to complete! About the Pan film, It does look like a very big production, CGI heavy etc… I expect it to be of the same calibre as a Harry Potter film or Paddington, as it was made by the same studio… I’m not so sure about the story, as Peter Pan’s childhood is quite grim and bleak…. I hope it’s not too Holywood… What worry me the most if that there seem to be a tendency to make trailers that show you the summarised highlights of films .. You go and see it and you realised that the best of the film was in the trailer, and the rest is a bit tiresome… It seems to be very frequent these days :(

The LOTR map was a group effort so actually it did not take them too long – perhaps an entire afternoon of beavering away. I made sure it crossed the Atlantic with us when we emigrated so it must be tucked away somewhere in one of the boys’ memory boxes. Perhaps they should produce an updated version now that they are a few years older. They also created a fantastic map inspired by Homer’s Odyssey too which, again, must be tucked away somewhere.

I totally agree about trailers. They show all the best bits and often give away too much of the plot. My oldest son also observed that they have cast a caucasian actress as Tiger Lily which hardly balancces out the racism of the Disney version of Peter Pan. Mostly I worry that it won’t be in the same spirit as JM Barrie’s play. It does look to be a visual treat, however. We may well go and see it just because we have not been to the cinema in a couple of months.

I think the film is a prequel to the story as we know it, I understand it’s about how Peter Pan became Peter Pan… That would be insulting if their tiger lily is Caucasian! Maybe it’s not supposed to be her as it’s set when Peter Pan is still a little boy? I agree the Disney version has some very cringe worthy lines in it :(

Yes, it could be that we are inferring the character is Tiger Lily when it is a completely different character. At least it looks to be a little dark which I think is appropriate as the whole Lost Boys thing is, I think, quite dark anyway.

Years ago I read a very good comic series on Peter Pan by French illustrator loisel… It looked stunning, but his version was very dark… I agree, it’s a dark story, I find that James Hook and Pan are both very dark characters. I like the whole inner turmoil that s going on in Hook’s head in the book… and pan is actually very selfish and mean in many aspects, I was reading earlier an article about j.m Barrie’s life and how he was very much like Peter Pan… :)

I will need to look up that comic version. I grew up not too far from JM Barrie’s birthplace. We would go on day trips to Kirriemuir quite often and always visited his house. A great deal of Peter Pan is essentially him processing childhood trauma so it’s definitely rooted in quite dark and brooding emotional stuff. Of course the kids just see all the adventure and fun – though they do see the connection between Hook and Mr Darling.

The comic series is for adults though as it’s quite dark… The very last tome left me speechless. Loisel’s takes on the whole story really unravels at the very end and it’s quite unexpected (won’t say more :) but not for kids. Didn’t Barrie’s brother drawned and Barrie was blame for it when he was a child? I know that his life is entwined with the Du Maurier family quite a lot and that some people believed that whoever he loved ended up dead :(

Yes, David died in an ice skating accident and James dressed up as David and spoke in his voice in order to appease his mother’s grief. It’s believed that’s where the idea of a boy who never grows up comes from and the Lost Boys too probably. All quite sad. I will definitely look out for that comic book series. (Apologies for totally sidetracking your post about pirates and maps and treasure, though it’s been an interesting chat.)

It’s lovely reading, it warms my heart and I hope Thom’s daddy is out of pain. As a child grew up in war torn country I loved drawing maps (seems like thousands of years ago now). Yes, and I used to love Peter Pan too :)

What country are you from? I think there is something very reassuring in drawing maps :) I like drawing mind maps :)

Vietnam, I left 45 years ago to Australia where I married and raised my children.

Have you managed to go back to Vietnam since?

This is awesome! I used to love drawing maps too, and your (successful) hunt for buried treasure looks like so much fun!

[…] Others like the process of getting lost and take some sort of pride in finding their own way back again, those think they don’t need a sat nav… ;) […]