As I mentioned in a previous post, we have spent these last couple of weeks exploring and revisiting Cornwall, as Paul was filming for his new video, I think the result looks very good:

Paul who was born and grew up in Cornwall really enjoyed paying a tribute to his homeland. As a family we visited Cornwall a few times over the years, some of these trips were documented HERE or more recently THERE.

I’m currently brewing a post on what’s left of the Cornish mines as we have been visiting quite a few old engine houses, on Thom’s request. They really are a part of the Cornish landscape and I find their story fascinating… Most of them (such as Wheal Basset near Redruth) only ran for 50 years, which is not that long, but they were and still are such an important part of Cornwall, having shaped the landscape and the lives of a lot of Cornish men and women…

We are really enjoying spending time on one of my two my favourite Cornish beaches: Gwithian – In the video, this is where you see this great shot of Tara racing with the drone on a long strip of sandy beach… (whenever Paul flies it, she turns into a demented beast, obsessed about trying to “get it!!”).

We all love going there… One evening last week, as we were walking back from the beach Thom got really in the zone with photography with his new camera, it was the first time I saw him concentrating that hard on the composition of a picture from an artistic perspective: He wanted to take a picture of the sunset with a flock of birds flying through in the shot, so he had to wait for the right time to shoot…

As we were driving back homeward from the beach, we saw this huge ring of fire in the distance. We realised that half the hill was on Fire in Carn Brea (right next to where we are staying) – which you can see at the beginning of this video, it’s the hill with the big cross on top… so we went to have a closer look at the fire, it was roaring and really impressive. 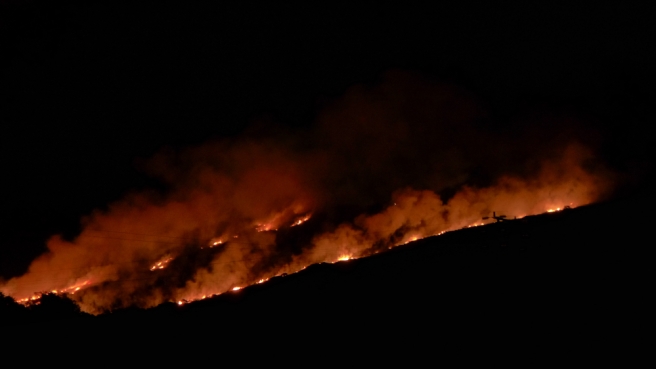 The gorse bushes caught fire. I have been visiting the back of this hill regularly, for dog walking and bird watching. I can’t help but feel sad for all the wildlife that lives there, amongst old mining engine houses and gorse bushes. It must have been a tragedy for the large amount of birds nesting in the hedges and gorse bushes there to have their nests burned.

Thom made up a song a while back which said “And the caterpillars are singing along with the birds…” I hope the caterpillars and the birds eggs didn’t get destroyed in that fire… otherwise neither of them will produce a new generation this summer!

While Paul was filming the cliffs in Land’s end, Thom and I met this beautiful moth:

…and this is how the cliff Paul filmed looks like from ‘the end of all land’: 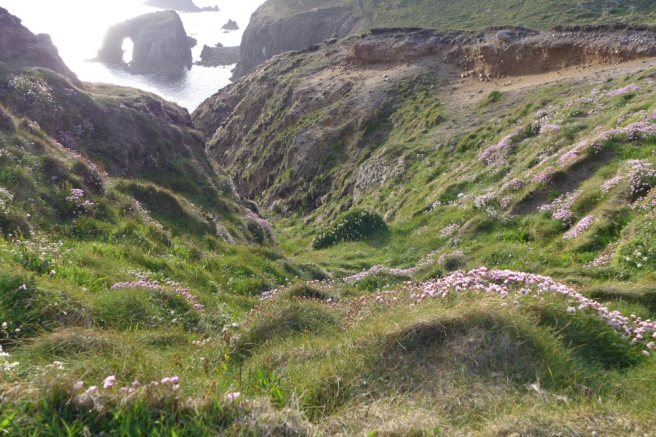 A couple of years ago, I took this photo of Paul and Thom in Land’s End…

If we get a chance, it would be fun to take the very same photo 2 years later… it’s crazy how much Thom has changed in two years!

Thom’s all time favourite Cornish sight is located along the cliff, in between Sennen Cove and Land’s End, opposite the Longships Light: the shipwreck!

Thom has been fascinated by shipwrecks since being here. He keeps asking us to play videos of ships having accidents whenever he gets a chance, and has been talking a lot about the Titanic…

Two years ago we went on a walk there while it was all misty and I took a lot of photos back then of that same wreck emerging from a sea of mist and fog. I remember the fog horn of the Longships light sounding at regular intervals to warn ships of the rocks along the cliffs so they don’t end up like this wreck. I loved these photos, but I think they are lost..

This is the same ship two years ago on a clear day: 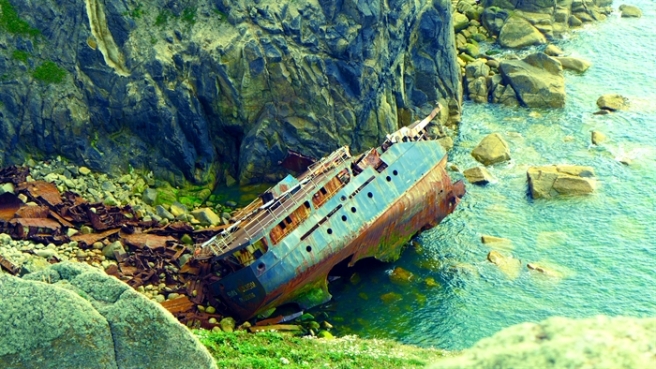 This time, I made an attempt to paint it in watercolours, while Paul was flying his drone:

Just as I was finishing this painting and Paul was packing up his drone, two of Paul’s old friends that he hasn’t seen since well over a decade appeared on the cliff, and one had a skateboard under his arm! I couldn’t help noticing them and pointing them out to Paul, somehow knowing that he knew them… and they were some old friends of his, who randomly appeared on that very cliff, at that very moment, on their way to do a photoshoot down by the wreck! So that wreck seems to have an important influence on our lives as we always gravitate around it!

That evening we found the very stone circle we had been looking for for a few days:

This place has a very powerful healing feel about it, it feels very sacred and everything feels alive and vibrant… the path that leads you there was crossing through a field of bluebells which had the most vibrant purple colour I had ever seen! A lot of ley lines go through it, including Michael and Mary, two of the main ones. This place has distinctively both male and female energy, personally I could feel myself being strongly connected to the latter… it felt very feminine and mothering, just how you would expect the earth to feel like.

The sun was setting and the colours were incredible!

Thom and I were both compelled to touch this quartz and be around it… It looks and feels very healing, the details on the quartz are absolutely stunning…

We went there twice so far, the first time we just took it all in and we all felt so moved and transformed by just being there, it is a very ancient and powerful place that feels alive.

The second time we went there Paul filmed it while I sat down with my watercolours and decided to paint whatever was coming up, trying to channel the energy of this amazing place. A few animals showed up, a Buzzard (Buzzard has been strongly present during this trip so far, I’ll write more about this another time!) a fish, and especially a bee, I could feel it in the centre of the circle… it’s interesting as bee symbolises fertility in many ancient cultures (I can’t help but noticing that I did write about the meanings of Bee a few days before we left for this trip, funnily enough…)

We spent some time tracking the ley lines, looking for and finding some amazing ancient sacred sites in the Penwith area (you can see some of them in the video…)

As stated on the Cornish Ancient Sites Protection Network:

“Cornwall has one of the most intensive prehistoric landscapes in Britain. And here in the far west peninsula of Penwith we have the highest concentration of ancient sites found in Western Europe.

There are literally thousands of sites densely packed into a setting that has changed little since the Bronze Age.”

We have visited and filmed only a few…

You can also see the Merry Maidens (which is the stone circle with no stone in the middle) with Thom running through the circle (followed by me, walking).

While driving around on one of our Secret Sacred Sites expeditions, we randomly found a hidden treasure: the remains of an ancient Celtic chapel from the 12th century built near a Holy Well, in the middle of Pixie Woods…

As you can see we spent most of our time on cliffs, beaches or ancient sacred sites… we spent hardly any time at all in the towns! We did go to Falmouth for dinner, shortly after we got here. Here is the view from the Irish pub we went in for a pint before heading to the harbour to have a meal watching a ferry going out to sea, while a dog kept doing loops jumping in the water (coming out and running back again!), to Thom’s greatest delight!

Next time I’ll do a post about the Seal Sanctuary, as I really enjoyed meeting seals, sea lions, penguins and otters and visiting the seal hospital!

Have a lovely weekend,

Noémie is an animal communicator on a mission to help humans & animals have a better understanding of one another. She offers guidance and mentoring via public speaking & workshops - online and in person. Subscribe to FocalHeart newsletter for updates on the next events. View all posts by FocalHeart

Noémie is an animal communicator on a mission to help humans & animals have a better understanding of one another. She offers guidance and mentoring via public speaking & workshops - online and in person. Subscribe to FocalHeart newsletter for updates on the next events.

All images and texts are copyright © FocalHeart 2013-2020, unless credited otherwise.